This week was good

Well..
This week was good. We were able to do a lot more work. We were able to bless a lot of people’s homes as well which gave us more people to teach. Just a couple.. But that's more than usual here. We met a really cool family, “C” and “H” and their 2 kids. She has big desires to know more, him will probably be a little more work which is interesting because he's the one who let us in to bless his home. haha. Oh well. The Lord just softened his heart so we could meet her. Hopefully that will go well. She wasn't able to make it to church yesterday. We met her Friday, taught her Saturday and committed her to go, but we feel like it was because she was scared that she didn't make it. We'll get some members over there to fellowship her and help her overcome that.
So “S” is still coming to church. She gets a ride so she's still solid and everything, just we haven't really met with her since she's kind of at a standstill. But we try to see her once a week. She just needs mom's permission now, did I already tell you that? Probably.
“M” was confirmed yesterday! She loved it. She was so excited all week. She's always texting us and talking to us about it. She was supposed to be going up to Tampa on Friday for a cousin's wedding, and she kept having a bad feeling about it because that's where a lot of temptation would be, so she listened to the promptings of the Spirit and decided not to go! She has a ton of faith. She's great. She added me on face so Hailey, if you can get on and do that.. Thanks.. And “P” “G”. He's the EQP here. He's way cool.
Thanksgiving was pretty good. The “G1” family had us over. The “G2's” in the ward were there as well. So there was a lot of food. Sister “G1” did the turkey 'El Salvador' style. It was really juicy and had some different spices and stuff. And you put it in a roll with different vegetables and some other things. It was really good. We were at their house for a while, then right after we went to a member of the Wellington ward with the other elders. The “L” family was baptized like 3 or 4 months ago. They are way awesome. I think I told you about them. They're the ones I have most of my pictures from. And I have a couple more from Thanksgiving.
I'm going to try to go get the A1C and eye exam this week.
Well.. I'll be home for next Thanksgiving :) So that will be good. And in a month we'll be able to talk to each other. I can't wait. I love you all! Oh and yes transfers are next week, so send stuff to the office later this week. k i loveeee youuuuuuuuuuuu.

Feeling a bit sick and a baptism! 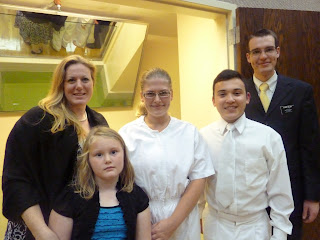 
This week was better. So I was starting to feel better this week, then on Friday, the day of zone conference, I got hit with a cold/fever. Maybe the flu. I don’t know. But I've been sick since Friday. So that's been lame. On Saturday, I pretty much just slept all day. The only thing we did was go over to Sister “S’s” house to visit with her and “M.” We had a way good lesson and chat. “M” was scared that maybe she'd fall back after being baptized and that she needed to know everything before being baptized. Well we testified and reviewed the baptismal interview questions and helped her see that she was ready. We were there talking for 2 hours and we asked her if she wanted to be baptized this Sunday (the next day) and she asked if she had to answer now. We said no, so she said she'll definitely have an answer by the morning. Well about 20 minutes after we get home, we receive a text: "Hey it's “M.” Let's do it tomorrow!!" So we had a baptism yesterday! It was super awesome. The baptism went great and after she got dressed and after the service was over, she was crying and saying she didn't want to leave because she felt so good and it was so awesome. And she sent us a text a couple hours later (I was still way sick and when we got home I just passed out on my bed ha), thanking us and saying how she's never felt more alive and more at peace in her entire life. It was awesome. Oh and at first I vowed that I would never baptize anyone on my mission, because I think the members should do it. But she asked me if I would baptize her. So I did. And in doing so I found out that I am getting a little big.... My white pants are SUPER tight. haha. I could barely get them on. I had to make a makeshift hook for the button so they would fit. haha. Dang it...... But other than that it was super good.


I'm going to try to go get the A1C this week. I also want to go get an eye exam. Just to make sure everything's all right. I feel fine, just to make sure. With that, I was wondering if I could get some new glasses.... haha I know I got some right before I left.. But someone sat on them and they're way crooked now. And broken.. So that can be a Christmas present. Oh and also, I want a USB drive to store some stuff. Like to back up my pictures just in case something happens to the SIM card. I bought a 4 gb one, and it's already almost full. So if it can be pretty big that'd be nice.


Now that “M” is baptized, we don't really have a whole lot happening. This week was tough because I was sick. So this week we'll just have to work extra hard. I'm doing ok. Still just hanging in there. I can't wait to talk to you guys on Christmas. That'll be good. I miss you. I love you guys a ton. byeeeeeeeeeeeeeeeeeeeeeeee.
Posted by Reese Thorne at 5:48 PM No comments:


So “S” is still living in a hotel. But now she's down in Lantana which is in my old Boynton Beach area. She thinks that her family might be moving to Georgia where they have family. We'll have to see. I really hope her family finds a place here, or at least if they go to GA, she'll look up the church and get baptized there.


We also have a way cool investigator name “M.” She's like 30(?) and she's living with/taking care of a member here named Sister “S.” They’re friends and Sis. “S” has been amazing to bring “M” to church and teach her. Pretty much everything we've taught her (like 3 times), she's already heard it or they've discussed it. It's been really cool. She's progressing really well. We just need to invite her to be baptized. I don’t know why we haven't.. I feel like the Spirit kinda held us back a little because she needed a little more time. Everyone is different and progresses differently. I've definitely learned that out here. I also have learned to love everyone. Like, before my mission, I feel like I loved everyone and tried to be compassionate to others, but just because I thought it was the right thing to do. But now I try to view everyone as a child of God and their potential. That's why I loved President Monson's talk during GC. I was thinking about that a lot, then he talked about it. It was way cool.


So every Friday, we eat at the “S's.” They're a Cuban family in the ward and they've been baptized in the past 2 or 3 years. They love the church and the missionaries. Well.. The dad is struggling and the son-in-law, but the daughter and mom are active. But they love us and love when we come over. Anyway, they knew Elder “B” when we were here in January, and I asked if they've heard from him at all. And “M” (the mom) said that she had just talked to him that day, and that she was supposed to call him later that night. So she gave him a call and I got to talk to him for a little bit! It was so cool I guess he's Elders Quorum President in his YSA ward. He's awesome. He still says that he's been meaning to get in touch with you guys... haha but talking to him, he's got a busy life. But it was way good to talk to him.


So the sister's name that sent the pic is Sister “Y.”  She's way cool. The whole family is. They were actually on Super Nanny like last year haha their kids are crazy..... I talked to Sister “G” yesterday and she said that there won't be Pupusas at Thanksgiving..... :( oh well. I may just have to wait until I come home.

A kind of rough week 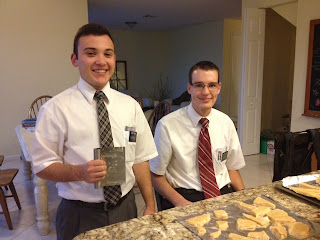 Dear Fam.
What's up. This week was rough missionary work wise. I'm still having a pretty good time though. We had some cool appointments lined up this week, but none of them went through. Luckily we contacted a couple of them and set up new appointments. We'll see. “S” was able to come to church. Her family is at a La Quinta Inn just outside of the ward boundary but the YW Leader was awesome and went and picked her up. They came about half an hour early so we had a lesson with “S”. She's super solid, we're just waiting on parental permission.. I guess she bore her testimony in young women's and was answering all the questions. Other than that, still no real investigators. That's been tough. I got the pizza. Thanks, that was a good surprise. I'm pretty sure that the “G” family is going to feed us on Thanksgiving. They're the ones from El Salvador. So I'll request some papusa's.
There's a recent convert here, “M”, who was baptized about 2 or 3 months ago. I don’t know, right before I got here. And she's Haitian and really really awesome and nice and sweet. She's got a great testimony and she really wanted to bear it on Sunday. When we met with her during the week, I told her that if she did it, then I would. So during sacrament, I could see her and she looked super nervous. She kept like starting to stand up then sit back down, then finally at almost the end of the meeting, she got up and did it. It was way good. So I got up too and did it and she was very happy about that. It felt good. K I love you guys.
Elder J Thorne

Posted by Reese Thorne at 6:39 PM No comments: 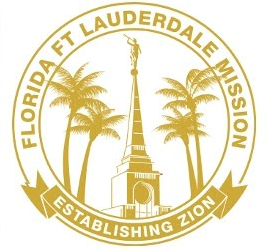 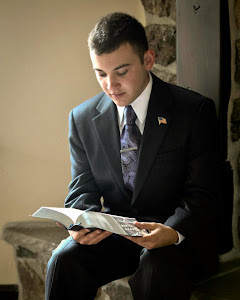